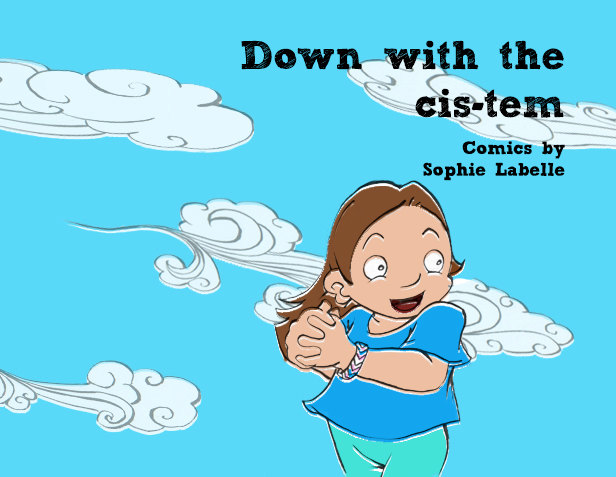 As part of Trans Awareness Month, CUSU LGBT+ hosted Sophie Labelle, writer/artist of the webcomic Assigned Male and prominent activist. Sophie spoke to us about transfeminism, coming out on DeviantArt, and her “transition” from teacher to cartoonist.

Sophie opened her talk with her experiences of becoming one of the few trans women visible in public/online spaces, and her assertion that “when masculinists are against you, you’re on the right side of history” demonstrates well her humour and resilience in the face of the harassment she receives. Describing the particularly virulent abuse she gets from TERFs (trans-exclusionary radical feminists), she criticised feminist spaces that are often either explicitly exclusionary to trans women or ignorant of the particular difficulties trans women face. Citing the need constantly to re-evaluate our understandings of ‘gender’ within these spaces, she advocated for greater openness and willingness to include and share experiences from not only trans women, but also non-binary people that experience yet other forms of misogyny/transphobia.

With these challenges in mind, Sophie went on to describe her positive experiences in and contributions to online trans communities that aren’t necessarily reliant on the existence of lesbian/gay groups. She spoke about the importance of monitoring/moderating those spaces so that the users of those spaces can feel as empowered and supported as possible, and how rewarding it is to have those communities. Alongside this visibility and outspokenness within the queer community, and especially within trans spaces, Sophie emphasised the need for responsibility and self-reflexivity when it comes to being able to speak on an international level – she explicitly rejects any authority as a ‘spokesperson’ for the trans community.

Expanding on her role as an activist, Sophie expressed the importance of self-care in what can be an extremely tiring environment. Her statement that “you can’t take a break from transness…you can’t choose when transphobia and cissexism will affect your life” is absolutely true, and many of us that are involved in any kind of campaigning that centres on our marginalised identity/ies know how exhausting it can be. Sophie particularly stressed the debt she feels towards her Montreal activist community, and the importance of having a supportive and accepting group in order to empower everyone involved.

A question from the audience prompted a discussion of the importance of language, in particular with regard to French and how difficult it is to integrate new words, such as non-binary pronouns, into general speech – she described the need for institutional authority in order to achieve this, and how much easier it is to circulate new terminology in English.

Sophie also used these ideas about language to bring into her talk the types of words/phrases used to describe children’s gender identities, and how the media likes to portray certain narratives that fit their (outdated) understanding of “how transness works” (for example, the “trapped in the wrong body” narrative that dates back to the 1950s). In particular, she referenced her own experience as a primary school teacher in Quebec – a school that has lots of trans children (some of which have inspired her comics). She pointed out how damaging this kind of language can be, particularly when lots of educational resources use this language, since it puts pressure on children to internalise binarist models of gender, and imposes the medical aspects of transness (medicalisation is of course are important for many trans people but certainly not all). What Sophie advocates for is more frank and open discussions of gender with children, as they pick up on traditional gender roles/stereotypes even when they are not explicitly taught them. At the moment, she affirmed, not talking about it is already doing damage.

Sophie Labelle’s talk was full of great insights, and her experiences working with children give her a particularly good perspective on how children do express their gender(s), and some helpful ways in which to engage with them about it. This idea of openness and inclusivity is something that ran all the way through her talk, including the way in which she structured it – which was not to push particular topics but to allow the audience lots of space to participate and facilitate discussion. It was especially fantastic to have a discussion about activism that not just highlighted flaws/inequalities in our communities, but offered positive methods to address them. There is no doubt that there is a long way to go with including trans people in wider queer spaces, but each time we engage with the issue and learn from each other we erode a little more resistance and grow a little more as a force for change.